In this episode of WUNC’s CREEP podcast, Quilla discusses the creation of the podcast’s theme song. The composition is deconstructed in the style of the Song Exploder show, and many layers as well as the bioacoustic sounds embedded in the piece are examined.

Quilla composed the theme music for “Anywhere But Here GSO” – a new podcast hosted by longtime Greensboro residents Maria and Tom. She combined beats, synths and electronic textures to create an upbeat song that evokes the feeling you get when you are walking into a coffeeshop.

Also, Quilla was a featured guest on Episode 3 of the podcast (“Bow to the Rebel Queen”) during which she discussed her multicultural roots, Burning Man and her love of Greensboro eateries.

Quilla was recently interviewed by University of North Carolina School of the Arts (UNCSA) music student Olivia Andersen as part of the school’s “Changemakers” series. Read the article here.

The piece focuses on Quilla’s work as an advocate for women producers in the male-dominated music industry. Through her collaborations with women and workshops teaching women about music production, she has provided training, visibility and opportunities for women artists at all stages of their careers.

The Changemakers series is described on the UNCSA website as follows:

“A changemaker is someone who is taking action to solve a social problem. They are people who create change and have the knowledge and will to do so. Changemakers can come from many different backgrounds and are passionate about helping their community. They don’t just create change for themselves, but for others around them as well. Everyone has the power to be a changemaker — even you. All you need to do is believe you can make a change, speak up, and surround yourself with people who are passionate about the same things as you so that you can grow together.”

Thanks for reading! Have yourself a good day.

“ANCESTORS” is an innovative piece of musical theatre being composed and produced by Quilla (Anna Luisa Daigneault) and choreographed by LeDarius Parker. It is an intergenerational story told through compelling dialog and live dance sequences accompanied by a powerful, beat-driven electronic score. The narrative focuses on a group of three characters who reside in modern-day Greensboro, NC. Each character encounters one of their ancestors during a dream, and undergoes a transformative process that leads to healing, personal reckoning as well as an appreciation for their lineage.

The dream state will be explored as a realm of possibility, communication and heritage. It allows for a large amount of artistic freedom during this musical. The production plays with different timeframes and addresses challenging, complex issues while remaining accessible to all audiences. The main themes that permeate “Ancestors” are recovering different types of human knowledge, reconnecting with one’s heritage, understanding the dynamics of migration, diaspora and displacement, as well as reviving reverence for the Earth.

The main characters represent a small yet diverse cross-section of contemporary North Carolina, and their ancestors represent a snapshot of humanity’s fascinating past without sugar-coating or glorifying it.

This project is set to premiere as a live performance in 2023.

This project is supported by the North Carolina Arts Council and partnering arts organizations such as ArtsGreensboro and the Arts Council of Winston-Salem and Forsyth County.

The music video for “Bow to the Rebel Queen” is out now! I want to thank all the amazing North Carolina creatives who poured their energy into bringing this production to life. Hats off to the director, Alexei Mejouev, who helped us get video done in one massive day, in a Covid-safe way.

“Bow to the Rebel Queen” is available on all streaming platforms on Quilla’s album “The Handbook of Vivid Moments” (Ritual Fire Records, 2020). https://orcd.co/quilla_handbook

This song was recorded with support from ArtsGreensboro and the North Carolina Arts Council. Their support is gratefully acknowledged.

I am delighted to be featured as the musical artist representing the letter “Q” in the upcoming book “The ABCs of Women in Music” written by Anneli Loepp Thiessen and illustrated by Haeon Grace Kang (GIA Publications, 2022). It’s so exciting to be featured among many other women musicians, as well as be recognized for my work as an electronic music producer!

If you pre-order this book, copies will be shipped to your door in February 2022. This amazing publication will also become available in all Barnes & Noble stores in the US and Canada as well as on Amazon.com in May 2022.

Description of the book

Meet Clara the composer, Ella the jazz singer, Selena the pop star, and Xian the conductor! Women in music are brilliant, creative, brave, and resilient. They are composers, conductors, singers, musicologists, electronic music producers, and so much more.

In this vibrantly illustrated picture book, meet 26 remarkable women musicians who collectively span over 1,000 years of music history and represent a diversity of cultures, races, professions, and abilities. Their incredible stories and beautiful work are sure to inspire a new generation of musicians!

As an avid collaborator with Elsewhere Museum, Quilla has contributed to many programs and events over the years. She composed music for Elsewhere’s DanceLab project in 2013, and was South Elm Projects Coordinator at the museum between August 2014 and January 2015. Through the South Elm role, she organized community outreach initiatives downtown, led brainstorming events, trained interns and collaborated with Elsewhere’s curators to hire artists to create public art projects funded by Artplace America. She also taught workshops for Elsewhere’s FoodLab program in 2015, where school children learned about cooking, art and storytelling.

She is pleased to be curating the musical performances for Elsewhere’s outdoor stage on November 13th, 2021. More info about the 2021 Extravaganza here!

“Ravens and the Wrens” – a new song by Molly McGinn, Quilla, Kate Tobey, featuring Brooke Stokes – is now out everywhere! You can stream or buy the track here.

Notes from Quilla:
“When I first heard a home recording of Ravens and the Wrens, I literally fell off my chair. I was taken aback by its power and beauty, and I sat on the floor in stunned silence for a while after listening to it. Kate Tobey had recorded a video performance of the song with Molly and Brooke, and had shared it online. I thought they were playing a cover of a classic Dolly Parton or Fleetwood Mac song that I had never heard before. I read the credits and realized that my dear friend and musical collaborator Molly had written the song, but I had never heard her sing it before. I immediately picked up the phone and called Kate and had a mild freak-out. I don’t know what I said, but I conveyed my enthusiasm for us to work together to produce a studio version of this track. Then we phoned Molly and asked her if she wanted to do that, and she agreed. She was surprised that I thought the song was so great. I said “OMG this song is literally the sound of angels”! And we got to work making the studio version you hear now.” – Quilla (August 2021)

Description of the Project
The song embodies a sound created for the new South: modern, inclusive and spiritual. Both a prayer and an anthem, “Ravens and the Wrens” lures the listener into the magic of the moment, bridging the human and natural worlds. McGinn’s vocal style conjures a blend of jazz, folk and soul, and Tobey’s violin brings a traditional, rustic quality to the piece. Powerful backing vocals provided by Tobey and vocalist Brooke Stokes resonate throughout the piece. Through carefully woven synth layers that form a lush, ambient bed of sound, Quilla’s electronic score adds a contemporary dimension to the song, elevating the folk genre by fusing the analog and the digital.

The lyrics were inspired by Molly McGinn’s friend: trans activist and author Sam Peterson. In his book, “Trunky: Transgender Junky,” Peterson writes about his first experience as a transgender man in the men’s ward at a drug and alochol treatment center in Butner, North Carolina. The lyrics attempt to capture his confusion as he struggles to see the difference between what’s healing and self-defeating as he makes his way through recovery. The chord progression is inspired by the Appalachian Old Time tune “Red Rocking Chair.”

“Ravens and the Wrens” is a folk song for the LGBTQIA community in the new south; it’s a call for healing from the trauma that held us back, and a plea for grace as we stumble our way forward. All genres of art are looking to be more inclusive. And folk music should be leading that conversation. This song attempts to represent that shift as we embrace non-binary narratives, and electronic instruments, and provides a place of inclusivity for all us.

On July 22nd, The Ink Project and Poetic People Power will present Embrace 2021: Reclaim What You Love, Restore How You Feel. This spoken word event will showcase the work of writers as they explore this theme in their own narrative. Artists will present pieces on topics including time, language, race, gender, and democracy. Thursday, July 22, 2021 at 8 PM (EDT) via Zoom.

Writers will present new works in response to a commission by the producers. As our society navigates the repercussions of 2020 and begins to emerge after a long period of isolation, this event provides a vital, communal space for writers to express their anger, hope, disillusionment, and resolve.

If you would like more info, here’s the Facebook event. Hope to see you there! Tickets are $5 at Ticket Tailor (link here: https://bit.ly/3wsUKYQ). The Zoom link will be shared via email once you have registered. 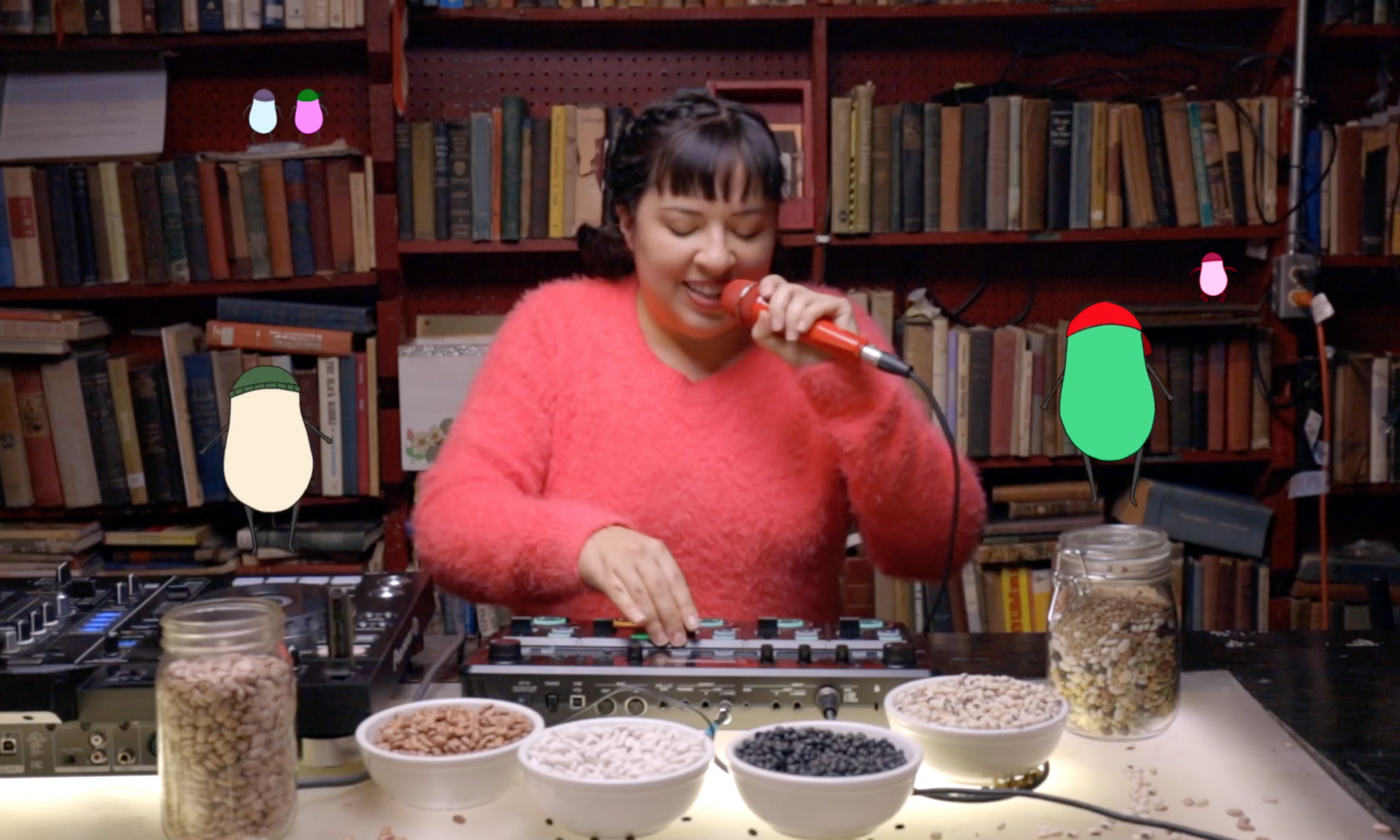 Exciting news! The music video for Quilla’s beloved song “Beans Beans Beans” is officially premiering on Saturday, July 24th, 2021 on PBS Kids NC and Rootle. It will be a featured segment on Rootle’s Block Party LIVE! At Home, an hour-long television extravaganza showcasing summertime activities, music and entertainment for kids of all ages.

Directed and edited by Alexei Mejouev with animations by Stefan DiMuzio, Quilla’s music video was filmed inside the amazing setting of Elsewhere Museum, a collaborative art world created from a former thrift store, housing a 58-year collection of things and contemporary art pieces. Many thanks to the curators of Elsewhere Museums for allowing this video to take place. Shout-out to artists Jesse Hoyle, Ashley Virginia Buffa and Liam Trawick for production assistance.

You can catch this episode of Rootle’s Block Party LIVE! At Home on Rootle on the following dates, at these times (all in EST):

You will also be able to watch the full episode online when it’s available on July 24th, 2021: pbsnc.org/rootleblockparty